The luxury of diversity 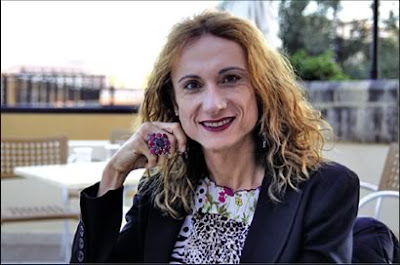 Actress, campaigner and politician VLADIMIR LUXURIA is in Malta for an international conference on gay rights. She talks to Raphael Vassallo about her struggle against prejudice, both in and outside politics.

There is a certain commotion at the San Gorg Corinthia Hotel in St Julian’s as I arrive for my appointment with Italian transgender celebrity Vladimir Luxuria – currently in Malta for the 31st annual International Lesbian and Gay Association conference, and the first event of its kind to be held locally. The hotel lobby is bustling with activity, what with conference guests arriving by the coach-load, and Malta Gay Rights Movement officials scurrying about to iron out the inevitable organisational hiccups here and there. ILGA members are immediately distinguishable from other guests by means of their plastic name-tags, and even more so by the bright purple sashes to which these are attached.

At the risk of sounding politically incorrect, a few are immediately identifiable even without such external paraphernalia. Curiously, however, Vladimir Luxuria herself does not quite fit into that category. For someone best known as an outspoken gay activits and a winner of 2008’s L’Isola Dei Famosi – Italy’s raunchy answer to the Survivor reality show – she is surprisingly inconspicuous in real life. (Note: though Luxuria is physically and legally a man, I have chosen to refer to her in female terms for two reasons: one, out of respect for her own wishes; and two, because gender is invariably more complex an issue than the reproductive organs with which one is born).

“Politics is a cynical and cruel world,” she later tells me, as we finally settle down for an interview overlooking St George’s Bay. I have just asked her about the rather blatant prejudice with which she was received during her brief career as a representative in Montecitorio: a prejudice perhaps best encapsulated by Alessandra Mussolini’s notorious jibe, “Meglio Fascista che frocio” (“Better a Fascist than a faggot”). “If I were the sort of parliamentarian who would be absent more often than present, or who didn’t take my job seriously, then they would perhaps have found other things to criticise me about. But I wasn’t that sort of representative, so they picked on me for the only two things they could – that I’m transgender, and on the Left.”

Vladimir Luxuria can claim the honour of being Europe’s first openly transgender member of parliament, and the second in the world after New Zealand’s George Beyer. Naturally, however, not everyone considers this to be a compliment, and attempts to discredit her as a politician have occasionally bordered on the downright ridiculous. At one point, the Italian parliament even had to pause to discuss her choice of bathroom, after a female Forza Italia MP complained about finding Luxuria in the Ladies (as opposed to the Gents, which – let’s face it – would have caused as much of a stir, if not more). So how does she cope with being attacked on such a trivial level? “Oh, but it’s not trivial,” Luxuria counters. “It is just one more way to try and deprive someone of their identity as a human being...”

Identity issues in fact lie at the heart of Luxuria’s struggle against homophobia. “In Italy there was general agreement in parliament over a law against homophobia,” she points out, “but while politicians on both the Left and Right agreed to include the words ‘sexual orientation’ in an anti-discrimination law, there was no agreement on the words ‘gender identity’. The Right simply refused to accept that there are different ways of identifying oneself with the sex of one’s birth. It is a concept that frightens certain people. To them, you are condemned to the gender in which you are born – regardless of whether your soul is male or female.”

Implicit in these assertions is the existence of a causal link between violence against gays, and recent legislation aimed at ‘normalising’ homosexuality – in Malta as much as elsewhere. For though Vladimir Luxuria concedes that the landscape has significantly changed since the 1950s, 60s, 70s and 80s – “We are no longer seen as extra-terrestrials, coming from another planet to destroy the sexual order of the Cosmos,” she quips – transgender persons remain particularly vulnerable to discrimination and above all hate crimes, which Luxuria argues have increased in both number and severity in recent years.

“The fact that there is more acceptance of gay issues globally, also means that the people who hate us, who fear us, are now feeling more threatened than before, and therefore have become more radical.”

Another aspect of the shifting landscape concerns a general hardening of the Catholic Church’s stand on homosexuality, ushered in under Pope Benedict XVI. “Papa Luciani – the Pope who reigned for a very short time, and over whose death a shadow still hangs – had signalled a different attitude, when he said that ‘God is both Father and Mother’. But Ratzinger felt he had to publicly correct his predecessor on this point, reasserting that men are men, and women women. Under this new Pope, the Church had stepped backwards.”

Luxuria also identifies a paradox in the evident discomfort of the Catholic Church when dealing with homosexuality in general. “In traditional Church iconography, ‘good’ has always been portrayed in transgender terms,” she claims. “I am reminded of the old Byzantine debates, when the Church discussed whether Angels were male or female. After much debate, they ended up agreeing that they are, in fact, neither...”

More recent developments also suggest an almost comical side to the issue. Luxuria invites me to consider the irony of the Pope’s recent appeal to disgruntled Anglican priests, who were leaving the Church of England in protest at its acceptance of same-sex marriages and the ordination of gay priests.“Pope Ratzinger said that any of these disgruntled Anglican priests could become Catholic priests... even if they were already married. Now, he is facing internal dissent over this issue. But it makes you ask: is the Church’s homophobia so strong, that it has even helped it change its attitude towards celibacy of the clergy?” At this point, I can’t help asking Vladimir Luxuria for her own views on the deep-seated prejudice against persons who do not fit into conventional sexual stereotypes. Why, in her view, is there so much hatred directed towards gays in general, and transgender persons in particular?

She almost sighs as she answers, as though pained to have to once again go over the same old hurtful territory. “There are a number of different reasons. The first and most evident is selfishness. Some people have a tendency to define ‘normality’ according to themselves; they love themselves so much, that they consider themselves to be the rule, and everyone else the exception. So if they are straight, it follows that it is ‘good’ to be straight, and that being gay is therefore ‘bad’. This, by the way, is the same attitude that causes discrimination according to race or religion...”

Another issue is that some people have what Luxuria calls “weak personalities”. “These people are afraid of anything that can threaten their sense of identity, because their identity is so fragile to begin with...” However, the most dangerous of all causes of homophobia is sexual repression – people who are themselves homosexual by nature, but have subconsciously repressed their sexuality. “When people like this see others who are free and happy, comfortable within themselves and with own sexuality, it makes them resentful and angry. These are the people who are likelier to resort to hate crimes against gays.” On a more positive note, Vladimir Luxuria is also confident that the international struggle for gay rights has now reached ‘unstoppable’ proportions. “Now, even people within rightwing parties are beginning to change their rhetoric,” she asserts. “In the past it used to be a case that ‘left’ meant ‘pro-gay rights’, while ‘right’ meant ‘anti’. Now the two sides are in competition with one another to win the gay vote, and the political voice against gay issues is losing strength. They can slow us down, but they can’t stop us.”