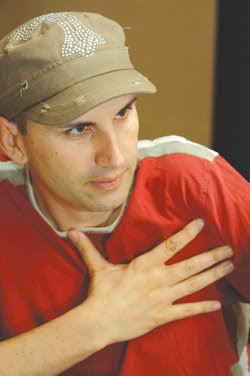 With his infectious smile, spirited remarks and positive energy, it's hard to imagine how Toscano suppressed his true being for 17 years to fit in society's pigeonhole of 'straight' people. At 43, the long traumatic journey has failed to etch wrinkles in his flawless complexion, which he attributes to daily moisturiser and veganism.

"I knew I was different at six. I was on a cabin cruiser with my family and I was staring at these beautiful lace curtains and I just wanted to touch them. Suddenly my uncle roars: 'Don't wipe your hands on those!' " he says, smiling.
By the time he was eight, he had crushes on his male teachers , which he kept to himself.

"I got the message pretty quickly that boys are supposed to like girls, and I heard bad things about homos, fags and queers," he adds.

Raised a Catholic and fascinated by spirituality, Toscano contemplated becoming a priest because being celibate meant he did not have to deal with his sexuality. He even went on a Capuchins' retreat and that was where he confided in a priest.
"He said God could heal me. He had me lie on the ground and prayed to drive the evil out of me. That was my first exorcism," he recalls.

Not finding the solution in the Catholic Church, at 18 he joined the Protestant Christians because the pastor told him God would "fix it". This did not work either, so he joined an ex-gay group in New York.

"This was at the height of the AIDS crisis so it was yet another example of evil," he says.
So why did he refuse to accept himself and prolong the agony?

"I wanted to be a missionary, but I needed to tackle this problem, because I was told I couldn't be gay and Christian," he said.

"I swallowed the lies that as a gay I couldn't be trusted, so I put my trust in older, wiser, straight men. The 10th Commandment says not to covet thy neighbour's wife, but I was coveting my straight neighbour's life."

So intent was he on becoming straight that at 25 he married a woman. She knew his concerns, but the pastor encouraged it and they both believed God would work a miracle.

"We were compatible companions, but I never desired her sexually, which must be one of the cruellest things a woman must face. I battled with depression and even contemplated suicide," he says.

After five years his marriage broke down and he enrolled in the ex-gay residential programme, Love in Action, which he graduated successfully from two years later. This period in life inspired his successful comedy Doin' Time in the Homo No Mo' Halfway House.

After being a "phantom of myself", he finally saw the light in December 1998, at the age of 33. Together with ex-gay survivor, Christine Bakke, he went on to set up Beyond Ex-Gay, an online resource for ex-gay survivors, and speaks regularly about the harm of therapies to change gays.
Toscano's advice to gay people is: "It's not easy or convenient, but if we're ashamed of ourselves, it's as if we give them permission to treat us shamefully."

His brain finally cleared, he started doing what he loves best - acting and stand-up comedy, earning a global reputation for his work, featuring in The New York Times, People Magazine and The Tyra Banks Show, among others.

He is now in Malta to present two performances: The Re-education of George W. Bush on Friday, and the Transfiguration, Transgressing Gender in the Bible on Saturday, at Warehouse 8, in Marsa (park near BoV and follow the signs), at 9 p.m.

"The Re-education of George W. Bush is not just about bashing Bush; it looks at issues of racism and sexism. We all have a little George Bush inside us, we just have to re-educate him. It weaves comedy and pathos and raises a lot of questions. For some people it's a bumpy ride," he says.
Peterson is in Malta on the invitation of Drachma, a Catholic group of gay people. For tickets call on 7940 4134.
Posted by Drachma at 10:03