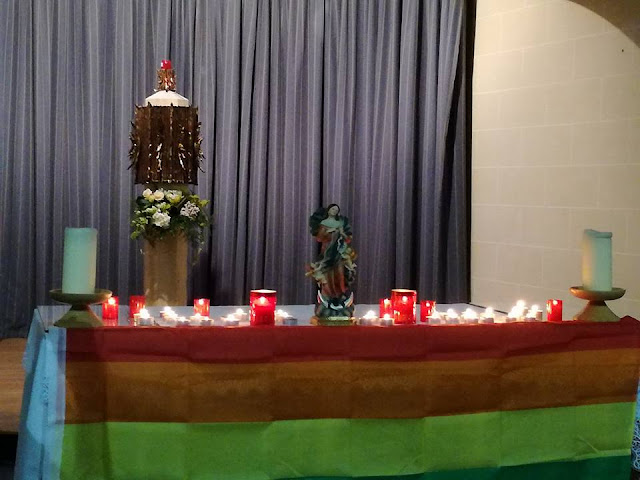 On May 17th, Drachma held a prayer vigil, as it does every year, to commemorate all victims of homophobia, biphobia and transphobia. This worldwide event largely escapes the attention of the media, but it has been celebrated globally for the past ten years.


It was only natural for us, this year, to place the rainbow flag around the altar, along with the statue of Our Lady, as we prayed especially for our brothers and sisters in Chechnya who are undergoing brutal persecution just for being gay. The rainbow colours of the flag symbolise the diversity that exists among God’s children and replace the colour pink as this is reminiscent of the six-pointed pink star that gay persons had to wear at Nazi concentration camps.


Unfortunately, discrimination and homophobia are still rampant in all countries, including Malta, as exemplified by the fact that a small number of persons seem to have taken objection to the use of the rainbow flag in the chapel during this said vigil. It is, indeed, ironic and sad that the persecution, electrocution, arrest, public flogging and killing of gay persons in countries such as Chechnya, Nigeria and Indonesia goes unnoticed and is not even considered to be newsworthy, while such a simple and spontaneous gesture marking the International Day Against Homophobia (IDAHO) was interpreted as a sacrilegious action.


If you want to know more about persecution of gay persons in Chechnya you may link to: https://www.theguardian.com/world/2017/apr/13/they-called-us-animals-chechens-prison-beatings-electric-shocks-anti-gay-purge

Further coverage of this story:

Maltese Gay Catholic Group Has The Best Response For Haters Of Rainbow-Flag Altar Vigil: Some people worry about the prosecution of gays in Chechnya, others worry about altar etiquette https://lovinmalta.com/news/this-maltese-gay-catholic-group-had-the-best-response-to-haters