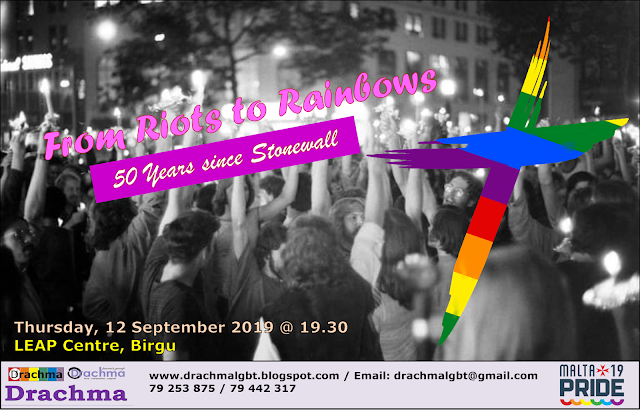 On the occasion of Pride 2019, Drachma will be organising this event on Thursday 12 September 2019.

It has been fifty years from the Stonewall Riots that were a pivotal landmark in the long struggle for LGBTI+ persons rights and dignity. We may be tempted to think that this milestone was completely  'secular' and possibly even allergic to faith.
This could not be further from the truth, for months before the Stonewall Rights, individual Catholic LGBT persons began what today is one of America's largest Catholic  faith LGBTI+ movement: Dignity USA. Over the decades, LGBTI persons of faith around the world worked hard to create awareness and safe spaces for LGBTI+ persons. These have included ecumenical spaces like the European Forum of Christian LGBTI+ Persons, the Global Interfaith Network and on a Catholic level, the Global Network of Rainbow Catholics that recently held its third General Assembly in Chicago.

Malta has played an important role not just in the field of civil rights, but also in spaces of faith. Drachma is also one of the oldest LGBTI+ organisations in Malta, and will be 15 years old in September. As an organisation rooted in faith, Drachma has played an important role in the local LGBTI community and in bridge-building with the local Church. On an international level, it has been a member of the European Forum for over ten years, and a founding member of the Global Network of Rainbow Catholics and the European  Network of Parents of LGBTI+ Persons.

In this meeting on the 12 September, we shall be looking into the global LGBTI+ faith movements  and reflect on the role of LGBTI+ persons of faith in social  justice.

All are welcome to attend. The programme is one hour long.
Posted by Drachma at 10:07